To be a cat


It must be really nice to be a cat.

I think about it a lot, about the feline excitement when the humans open the front door.  You put a paw out, and the tip of your nose out.  Adventure is calling you; you stop to sniff it and feel the breeze of it in your whiskers.

The cat adventures that cats go on throughout the day; stalking through the neighbors' gardens for the scurrying, squeaking things to hunt.  Pouncing atop fences and exploring, seeing the sights humans hide from each others eyes and all the secrets of backyards and under porches and inside garages.  Wandering to the woods, and hiding up tress or under holes when strange humans and dogs appear, then back out, to stare cautiously and curiously at the dancing water of a creek.

The human is making aggravated human noises at you, as your wet nose and twitching whiskers are tasting the adventures before you.  So you turn your lamping cat eyes at the human in pity, at the poor human things that never hunt and never climb or jump or pounce, and merely open your doors and cans.  The human makes more noises and starts to close the door.

But you tense up, staring in to the bright light of the yard.  You hesitate; crossing the threshold, again in to the unknown, leaving behind the familiar for the wide world outside.

"Cat, will you move?" the human yells.

And as the heros in the legends who received the questing call, reluctantly you leave behind your home; you answer to adventure, allow yourself to be swept in the hunting and prowling it affords, and wonder if you will return, later in the day, the same cat as when you left.
Posted by Reece at 2:43 PM No comments:

What IS Santa?: a proposal for a modern understanding


For as long as I can remember, every Christmas, I have been confused by what exactly Santa Claus is.

Historically, Santa Claus is St. Nicholas of Myra, a Christian archbishop in modern-day Turkey who lived during the Roman persecution of the Church and was present at the Council of Nicea.  He was claimed to be a wonder-worker, and was also well-known for his anonymous gifts to the needy.  He has historically been honored on the 6th of December, and because of his generous reputation convents and monasteries began a tradition of sneaking out at night and delivering gifts to the poor. (see here, here, and here for references, the middle one being especially fantastic)

Among the hundred or so other things of which he was patron saint, one of them was sailors.  For this reason, sailors would often find themselves back home on the 6th, and be able to give a present obtained at sea to their children "from St. Nicholas".

That all makes sense to me.  Santa was a really cool guy who loved the poor and Jesus, and he was such a great guy we still do nice things for children and the poor because of him.  "Here's an extra toy, son, in honor of this really great guy."  Awesome, sign me up!

What doesn't make sense, though, is the weird Santa of American folklore, the guy who lives at the North Pole with a cadre of elves, who flies around in a sleigh pulled by magic reindeer and sneaks in to your chimney to deliver gifts to all the kids all over the world.

The Night Before Christmas, arguably the progenitor of the modern mythofigure, describes Santa as a "right jolly old elf".  As a kid, I took that to heart and assumed Santa was like the Elf King by virtue of being the tallest and fattest of the elves, and that makes him in charge (I guess the same way the Great Goblin in the Hobbit is king of the goblins). 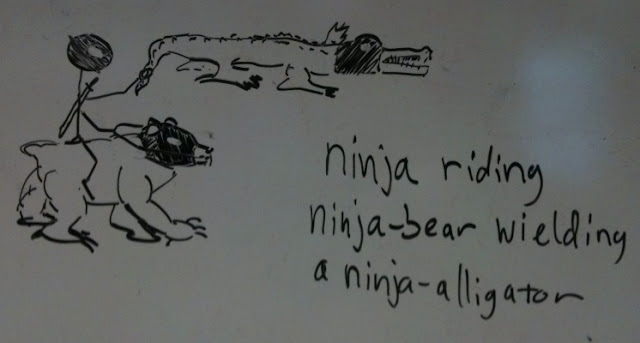