Why the Shroud of Turin Can't Possibly Belong to Jesus

A friend of mine recently posted the following picture on facebook. 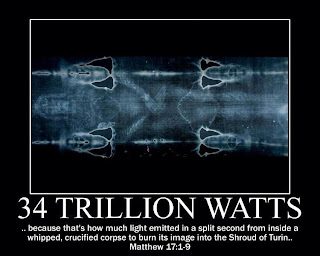 The caption refers to recent experiments trying to duplicate the image on the Shroud, specifically by bombarding it with electromagnetic radiation.  (This is the closest thing to a reference I could find - it's in Italian, sorry.)

A have a decent number of friends who very earnestly believe the Shroud of Turin to be the very same piece of fabric used to wrap the crucified body of Jesus.  By some unknown process, at the moment of his Resurrection, they believe the Shroud was irradiated to contain a photo negative imprint of Jesus' body; I don't know why the Resurrection should produce radiation, but then I guess I don't know why it shouldn't, either.

Even recently, in late March, one scientist in Italy produced tests tracing the Shroud to within the era of Jesus' lifetime.  This contradicts dozens of other scientific and historical investigations concluding that the Shroud came in to existence sometime in the 12th century AD, but I guess it's something.

For all I know, the Shroud really was caused by miraculous radiation, and for all I know the Shroud absolutely existed in the first century, before being lost to all record for twelve hundred years, after which time it appeared suddenly and without provenance in France with more carbon-14 in its fibers than a natural piece of fabric should have.  That might very well be the case.  I don't know, and maybe I never will.

What I do know, however, is that the Shroud of Turin was not the piece of fabric that was used to wrap Jesus' body.


The Gospel of John, in the 20th chapter, describes what he Apostles saw when they came to the tomb of Jesus:

And on the first day of the week, Mary Magdalen cometh early, when it was yet dark, unto the sepulchre; and she saw the stone taken away from the sepulchre.
She ran, therefore, and cometh to Simon Peter, and to the other disciple whom Jesus loved, and saith to them: They have taken away the Lord out of the sepulchre, and we know not where they have laid him.

And the napkin that had been about his head, not lying with the linen cloths, but apart, wrapped up into one place.

Then that other disciple also went in, who came first to the sepulchre: and he saw, and believed.


The above is quoted from the Douay-Rheims 1899 American Edition; I chose that translation because most of the people who believe in the Shroud are apparently Roman Catholic.  Rest assured, the KJV, the NIV, and the NRSV read the same way.  More importantly, the underlying Greek text reads the same way:

which is the relevant portion of the above passage.  Notice, Simon Peter saw "linen cloths" lying in the tomb.  The Greek there is "τὰ ὀθόνια" which is explicitly in the neuter plural, a word for a bandage or wrapping according to Strong's Concordance.  Not only were there multiple cloths that had been used to wrap Jesus, there was also the napkin used to wrap his head, "τὸ σουδάριον".

Also important is the word for how Jesus' body was wrapped with the linens.  John 19 describes Joseph of Arimithea and Nicodemus preparing his body.  It says:

And after these things, Joseph of Arimathea (because he was a disciple of Jesus, but secretly for fear of the Jews) besought Pilate that he might take away the body of Jesus. And Pilate gave leave. He came therefore, and took the body of Jesus.

And Nicodemus also came, (he who at the first came to Jesus by night,) bringing a mixture of myrrh and aloes, about an hundred pound weight.

They took therefore the body of Jesus, and bound it in linen cloths, with the spices, as the manner of the Jews is to bury.


Jesus' body was bound with the linen cloths.  The Greek says:

The word for "bound" in this sentence is "ἔδησαν", from the Greek δέω which means bound, or tied or restrained.  It does not mean "draped".  For instance, in Koine Greek, if you want to say that something is necessary, or that you are required to do something, you would use this same verb, meaning that you are bound (restrained) to do it.  (Also notice the word "ὀθονίοις" from above, again in the plural form, meaning there many cloths.)

We can compare this to earlier in John, chapter 11, where Jesus brings Lazarus back to life:

They took therefore the stone away. And Jesus lifting up his eyes said: Father, I give thee thanks that thou hast heard me.
And I knew that thou hearest me always; but because of the people who stand about have I said it, that they may believe that thou hast sent me.
When he had said these things, he cried with a loud voice: Lazarus, come forth.
And presently he that had been dead came forth, bound feet and hands with winding bands; and his face was bound about with a napkin. Jesus said to them: Loose him, and let him go.


Again, after the pattern of Jewish burials of the time, Lazarus is bound with multiple strips of linen and a separate cloth for his head.  Here's the Greek:

The operative word there is "κειρίαις", which is in the dative of means, and is plural, and means "bandage".  You can also see the word "σουδαρίῳ", which is the dative singular of the same word used for the head covering in John 20 above.  Also in this sentence is "δεδεμένος", which is also a form of the verb δέω (the perfect participle).  Lazarus, like Jesus, was "bound" or "tied" by the linen cloths.

That's what the Apostle John, an eyewitness of the event, has recorded.  John is the only gospel writer to mention Jesus' grave clothes, so his is the only account of it.  According to him, Jesus was buried the way other Jews of his time were buried, being bound and wrapped with strips of linen, his head wrapped separately.  John wrote this, and his account of it is considered to be inspired Scripture by Christians around the world, Protestant, Catholic, Eastern Orthodox, Coptic, even Nestorian.  There were multiple strips of linen, they bound him, and Jesus' head was separately wrapped.

What is the Shroud of Turin?

It's a big ol' blanket that allegedly was lain over the body of a man front and back.  It covered his head, and all of his body.  It is a single piece of fabric.  It is not a bandage, nor remotely bandage-like.  It did not wrap the man pictured, but sat on top and under him.  The man pictured was definitely not bound or  "δεδεμένος" by the Shroud.  It allegedly sat directly on top of him, because the man allegedly bled directly on to the fabric, hence the shapes of the blood stains.

Whatever it is, it could not possibly have been the fabric used to cover Jesus' body.  An eyewitness -- one of the 12 Apostles, who was at the scene -- he described -- in the Bible -- exactly what covered Jesus' body.  His description does not match that of the Shroud of Turin.  Case closed.

Maybe the Shroud is miraculous and inexplicable and beyond the ken of science to describe.  But it ain't Jesus'.

[EDIT: I was wrong about John being the only one to mention this.  Luke also mentions it, in chapter 24, stating that Peter came to the tomb and saw the linen cloths on the ground:

But Peter rising up, ran to the sepulchre, and stooping down, he saw the linen cloths laid by themselves; and went away wondering in himself at that which was come to pass.
Ὁ δὲ Πέτρος ἀναστὰς ἔδραμεν ἐπὶ τὸ μνημεῖον· καὶ παρακύψας βλέπει τὰ ὀθόνια μόνα· καὶ ἀπῆλθεν πρὸς αὑτὸν θαυμάζων τὸ γεγονός.

Hmm I respectfully disagree, I believe that multiple cloths were used to wrap Jesus, the shroud being one of them. well yeah of course multiple cloths were used, you never just wrap a dead body in one sheet. The very nature of the cloth seems to suggest a supernatural event like you stated, and there is also the incredible image of agony the person endured. I also don't personally believe in carbon 14 dating, but that's just an opinion of mine. The shroud was burned which might have possibly affected a c14 dating anyways. Another thing to consider is that there is plenty of pollen on the shroud, I've heard a botanist from Israel studied them and dated them to around the time of Jesus, can't confirm this. If it is the shroud of Jesus then his DNA is on it and this means Satan will probably want to clone him , possibly creating the antichrist from the DNA.

Hey, thanks for commenting.

The botanists haven't dated the pollen, I don't think. They've said that some of the pollen could have come from plants in Israel at around that time. Maybe they do. I don't know if there's enough evidence for it or not, but I'll grant that the Shroud could have come from the exact year AD 33 and is traceable to a region exactly ten miles around the city of Jerusalem.

It still wasn't Jesus' Shroud. Jesus was not covered in a Shroud. He was wrapped in hundreds of bandages. His head was wrapped in a separate cloth from the rest of his body. Whatever the Shroud is and whoever's face is on it, it was not the burial cloth of Jesus and it was not imprinted with his face at the moment of the Resurrection.

If you don't like carbon dating, then that's fine. No Christians had any recollection of the burial shroud of Jesus existing until around the start of the Middle Ages, when relic collection and simony were big and suddenly hundreds of purported "shrouds" came in to existence. The Shroud of Turin was one of those shrouds appearing in that time frame. The carbon dating shows that it comes from the same time frame that it first appeared in history, but we don't need the carbon dating; no Christians knew the Shroud existed until around the 14th century.

Again, I don't know how they made the Shroud or where it came from. But it didn't belong to Jesus. If it is supernatural in origin, then there is some other explanation for it than it being the sheet used to cover Jesus' body.

Where does it say he was wrapped in hundreds of bandages? Cloths is plural for sure but that just means more than one .from my understanding and i asked this very same question on the Facebook
Site the shroud guild the shroud was wrapped over the body from front to back and then pieces of linen strips were used to tie it around the body like around the ankles , legs , waist and head or neck area so that the body was bound .the napkin mentioned in the gospels was probably the sunderhin or what is called the cloth of eddesa which resides in modern day turkey and all of this was how the Jews buried the dead back then .plus if think about the women were coming back to the tomb on sunday to finish the annointing of the body with spices and such so why would they have used hundreds of wrappings if they were coming back? That would have taken forever to undo.this was explained to me and in my mind makes perfect sense