Richard Feynman and the Message of Christmas

I often come across as a Grinch during Christmas.  It isn't that I don't like the holiday, it's that I find the actual celebration of the holiday so small compared to the actual ancient reason for celebrating.

The phenomenon of Christmas, as it exists today amongst moderns,  is largely a commercial platform to sell you movies, toys, electronics, and honey baked hams.  We sing about snow and various foodstuffs eaten and herd animals, we share some presents, spoil our children, and eat a lot of food.

To most modern people, this is what it's about.  Its about time with family and the magic of Santa and having fun singing Christmas songs.

To explain Christmas, then, let me begin with a quote by Richard Feynman (from this video interview): 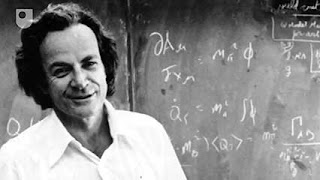 I can’t believe the special stories that have been made up about our relationship to the universe at large. They seem to be… too simple to conn- too local, too provincial! The Earth! He came to the Earth! One of the aspects of God came to the Earth mind, you. Look at what’s out there! It isn’t in proportion.

Richard Feynman gets Christmas.  In his own way, as a nonreligious Jew, Feynman understands the celebration of Christ's birth better than most people alive today.

The Christian religion properly centers itself, and distinguishes itself from other theistic religions, by two scandalous errors about God.  Two propositions about the divine that are rightfully offensive to the pious.  Two dogmas that are nothing short of pure blasphemy.  Statements which no human being should ever rightly dare to say about the Most High.

Christmas is the celebration of one of these blasphemies.  (The second is celebrated on Good Friday.)

This holiday commemorates the day when Christians claim that God came to Earth in the form of an infant baby -- what is called the Incarnation.

Those words may have lost their sting to you.  To many Christians it is a bromide that they've heard so many times they forgot what it means.  And many modern nonchristians don't understand what is meant by the word "God."  They confuse the ineffable creator of time and space with dudes in the clouds, or comic book characters, or weird tentacled things that live in space.

But Feynman was a major theoretical physicist, from a Jewish cultural background.  He was in a better position to understand what exactly the word "God" means.  Studying the universe and the mind-boggling complexity of the patterns obeyed at lower and lower levels, Feynman would not be capable of confusing what is signified by the proper noun "God" with something like a man in a cape with a big hammer — that is, with some regular ol' god.

When Christians say "God", they are not talking about a bearded dude in the clouds.  They are talking about the mind that first dictated and ordained the sort of phenomenon that Feynman struggled his entire life just to bring to a first-order approximate description.

Feynman also was not able to think provincially.  Humans have always had trouble understanding the stupefying scale of the Universe at large, but physicists are usually given a better feel of it.  The universe is so large that its size can only really be properly expressed with scientific notation — there are too many 0's otherwise.

When we talk about the Earth and humankind, we don't know anything else, so it is easy to have an inflated view of ourselves.  But in the cosmic sense, we are slightly above nonexistent.  We live on just one planet in our solar system.  Our sun is not particularly interesting, as far as solar properties go.  It's a pretty normal star.  In our same galaxy, there are some 250 billion (billion with a B) other stars, and we now believe most of those probably have their own solar systems like ours.  Our galaxy, the Milky Way, is just one galaxy amongst trillions suspected to exist in the observable universe (trillion, with a T).  Cosmologists often just model entire galaxies as point particles -- as insignificant atoms in a giant cosmic fluid.  And beyond the observable universe, who knows what else exists.  We are a speck in a speck in a speck in a speck compared to the Universe, and the universe itself is just a speck within the mind of God.

We are really nothing important, and Earth is nowhere special.

While this is a scientific truth, it is also a biblical truth.

When I consider Your heavens, the work of Your fingers,
The moon and the stars, which You have ordained;
What is man that You take thought of him,
And the son of man that You care for him?
-- Psalm 8:3-4

In the Bible, all the nations of the Earth and all the inhabitants therein are accounted as nothing.  They are dust on a scale -- when you go to trade silver for grain, you zero out the trays, check the balance, remove the crumbs left over, but the dust is what you don't even bother brushing off.

Christians teach and celebrate that the infinite being to whom the Earth is but dust, this being who is immaterial, invisible, and who exists without limitations, this being took to himself a human nature and entered into the physical world, born as an infant child inside a tiny little town on this tiny little speck of dust we call a planet.

This is blasphemous, scandalous, offensive, absurd, and violates all notion of scale or proportionality.

And that scandal is precisely what makes the message of Christmas such a beautiful one.  It is why Christians have traditionally celebrated Christmas by great acts of charity.

God has no reason to care about us or to stoop so low to us.  Yet he did.

The infinite, finite.  The immortal, mortal.  The transcendent, physical.  The omnipotent, helpless.  The glorious, an infant child in diapers.  The self-sufficient, crying to be fed.

The Jewish priests of Jesus' time understood this blasphemy.  Jews and Muslims today still understand it.  Richard Feynman understood it.

To truly understand Christmas, you must hold both; that the Christian doctrine of the Incarnation is blasphemous and preposterous and entirely out of proportion; and that nonetheless, it is a blasphemy authored by God himself.

This Christmas, I hope you and your family will again be shocked and offended by the message of Christmas: that the Word became flesh, and dwelt amongst us.
Posted by Reece at 1:17 PM