Opposed Checks in D&D are the Same as Coin Flips

This is a lesson in statistics and probability, as applied to the popular Dungeons and Dragons role playing game.  I'm having trouble lately with the LaTeX embedder: if you see a lot of dollar signs and slashes, then check your plugins and permissions on your browser and allow MathJax to work, so you can see the equations better.

Even before this, rolling dice was a common way to set the difficulty of something in old versions and in other non-d20 games.  How hard is the door to force?  You didn't think of it, now you're on the spot, so you roll a die to figure out how hard it is.  Then you tell the PCs to beat that number on their own roll.  Makes sense.

Doing checks this way is, from a probabilistic point of view, about as good as flipping a coin. The probability of the PC winning is slightly more than 50-50.  In terms of DCs, an opposed check (before modifiers) is equivalent to a DC of 10.5.

When you roll a die, a number comes up.  A random number, hopefully.  If the dice has $n$ sides, then this number is between $1$ and $n$.  It is customary to denote a random number with a capital letter: in this case, I'm going to call $X$ the result of rolling the die; $X=1, 2, 3,\ldots, n$, depending on what we roll.

In our case, we are going to roll the same die twice.  This gives us two random numbers (the results of the two dice), which we will call $X_1$ and $X_2.$  For concreteness, suppose this is an opposed strength check between the PC and an Orc.  We'll say that $X_1$ is the die we (the GM) roll for the Orc, and $X_2$ is the die that the PC rolls.  We want to know $\Pr(X_2 \geq X_1)$, that is, the probability that the second result is higher than the first or in game terms, the probability that the PC wins his contest against the Orc.

This could go a number of ways.  The GM might roll a 1, in which case the PC is guaranteed to win, or the GM might roll a $n$, in which case the PC has to also roll $n$ or lose, with other possibilities in between.  But we don't want to consider the probability of the PC winning given some particular roll from the GM, because that's trivial.  So what we want to do instead is consider all of these possibilities. 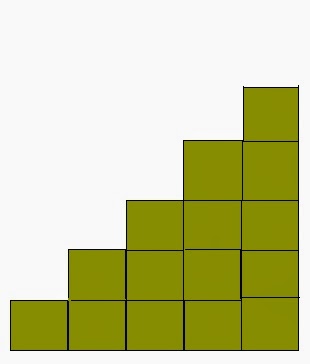 This shows a bunch of stacks of squares, increasing from 1 to 2 to 3, on up to $n$.  The area of these squares is $\sum_{x=1}^n x.$  Now consider a second one of exactly the same size: the two interlock, forming a rectangle: 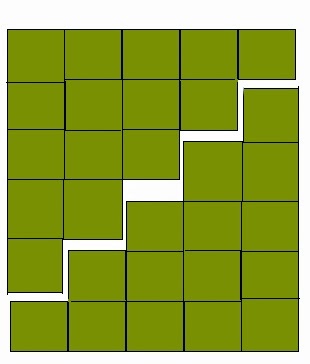 I did this all for dice, which are what is relevant to RPG players.  For dice, the result is not quite $1/2$ because the rolls can only equal certain specific results (like 1, or 7) and a tie goes to the player, but in a general case, it is actually true that the probability of a second random number being larger than the first random number is exactly $1/2$: that is, $\Pr(X_2>X_1) = \frac{1}{2}.$  I'll prove it.

So, consider  $X_1, X_2$, which are still random numbers, but not necessarily from a die.  For instance, we might push blocks on ice, and $X_2$ and $X_1$ gives the distance the blocks travel before coming to rest.  Or throw darts at a wall and $X_2,X_1$ are the distances from a bullseye.  Or something.  It's also not necessarily that case that every possible value is equally likely.  For a fair die, every number has probability $1/n$ or coming up; for throwing darts at a bullseye, if we're any good, then we will be more likely to be near the bullseye.  Let $\Pr(X=x) = p(x)$, where $p(x)$ is just some function: give it a value $x$ and it gives you a probability $p$.  Here $p(x)$ is called the "probability distribution function".  For simplicity, we also consider $\Pr(X\leq x) = F(x)$, called the "cumulative density function".  This is the probability of $X$ being less than some value $x$; as we'll see, a separate symbol for this is really useful.

So, the long and short of it is, if we have two random numbers that we produce in the same way, one after the other, and we want to know the probability that the second is larger than the first, then this is 50%.  In terms of D&D, this means that if you generate the DC for a skill check by rolling a die, then have the PC roll to beat that die, then you may as well flip a coin to accomplish the same thing.  This also means you can fix the DC of the opposed rolls at 10, and just add the Orc's bonuses and subtract the PC's bonus to increase the DC; it achieves the exact same thing.

If this result is unsatisfying to you, consider using a different system of opposed rolls that changes the dice used by each party, for slightly swingier results.

This is very interesting, I also never thought about the sum first n positive integers series like that. But I was wondering, if instead of the two rolls trying to beat each other, they are instead trying to succeed at beating a target number (akin to Basic roleplaying where to make a successful attack you roll under your attacking skill and to block a successful attack you can attempt to roll under your skill at blocking.) Is there a way to simplify it similar to this? Or is it just not really applicable.

Let me make sure I understand the question.

If you are rolling a 20-sided die, then the probability of rolling less than $x$ is $p(x-1)$ (I hope the math encodes correctly there). That's based on the PC, and doesn't change.

But, if the DM didn't figure out the Orc's block skill beforehand, then maybe he'll roll for it. Let's call that roll $X_1$. Then the DM rolls again (call it $X_2$) to see if the Orc blocks, and has to get less than $X_1$. So we need to know $\Pr(X_2<X_1),$ which is the probability of the Orc blocking. This would work in an analogous way to the above.

Apparently the math does encode!

Let me take away all of the fun of doing the sum yourself:

Hope I did that right. It's late here. I'm so sorry if you received a dozen replies in your inbox, I had trouble getting the equation above to come out right and couldn't edit the comment.

Cool, thanks for that. You got the question right yeah. So if you are rolling to determine the difficulty of something, you might as well just use the median value of the die. Thats pretty interesting.

Probabilistically, they're the same. That doesn't mean that your players will respond the same way, though :P