Orcs are a fantasy monster.  While Tolkien may have standardized them as the basic low-level mook hounding the protagonists, the idea of the orc goes back millennia before.  The word "orc" is an Anglicization of the Italian word "orco", which is a kind of monstrous demon of Italian fairy tales that feeds on human flesh.  This is identical to "ogre" in classic French fairy tales, which became its own type of monster in the modern era. 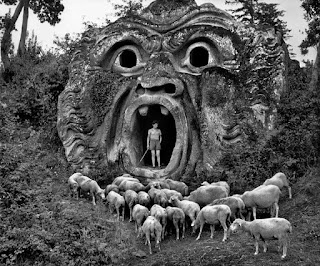 The orco takes its name from Orcus, one of the Roman gods of the underworld.  Orcus was particularly associated with torment and punishment, and therefore also associated with evil and demons.  He was normally depicted as a giant hairy monster.

Tolkien's orcs are likewise demonic monsters who eat human flesh.  Tolkien never settled on one particular explanation of their origins.  The movies actually show us two of his proposals: one, as corrupted elves who were bent by Sauron's dark powers, and another as monsters created by evil magic and birthed from pits of mud and slime.  In the Hobbit, orcs are just very large goblins.

Orcs cannot stand sunlight.  They hide from daylight in caves and holes underground, and only emerge during the dark of night to slaughter and plunder, and drag their victims back to their lairs to be devoured.

Whether demons of a dark god of death, or spawned from a wizard's slime pit, orcs are evil.  Orcs are inhuman monsters.  Orcs don't exist in the real world; but if they did, orcs are exactly the thing humans should hate and kill.

Orcs are more intelligent than the wolves they partner with.  But not much.  Orcs can use weapons and tools and battle tactics and have fighting prowess equivalent to a man.  This is arguably what makes them such an ideal opponent in fantasy.  They offer the challenge of killing a human-like foe, but without the moral ambiguity of murder.

Because you can't murder an orc.  You slay an orc.

Orcs are irredeemable monsters of bloodlust, hatred, and violence.  They have nothing to offer to people, except the adventure of slaying them.

Why am I saying these mean things about orcs?  Because that's the way orcs "are".  Obviously orcs don't really exist, and therefore "exist" only in a kind of tertiary sense.   But in so far as orcs are postulated in fairy tales and fantasy, that is what orcs are.

Now.  This topic of orcs and their portrayal is currently trending on twitter.  So if you just read any of the things I said about orcs, and your thought was "how dare you say that about black people"... then you are a racist.

And I can hear you back-pedaling.  No no, you don't mean that you think of black people when you hear those descriptions (even though you made the association...).  What you mean is that the kind of language I am using to describe an inhuman monster, is the same kind of language used by racists in the past to dehumanize people.  When books or games describe orcs, they lean on racist language used in the past.  It's those other people (whose thoughts you can read) who are thinking of black people when they describe orcs.

But that assertion has the order of things reversed.

The reality is that racists use orcs to describe other humans.

Racists often try to cast their fellow man as an orc, as a savage monster without a conscience.  Racists try to pretend that another group of humans are creatures from fairy tales and nightmares.  Racists want it so that when you think of their particular pet group of people to hate, they evoke in your mind the fiends that will drag bad children into the darkness to be eaten.

If you think you can counter racist descriptions of black or brown people, by portraying orcs as favorable depictions of minorities, then you are doing what the racists wanted.  You are linking a group of humans to the thing lurking in my childhood closet.  You are strengthening the association that the KKK wants us all to have.

When you try to portray orcs as peaceful, thoughtful souls with a beautiful and rich culture of oral histories and excellent pottery, you aren't doing anything other than saying you think some group of humans are a reasonable stand-in for inhuman monsters... but inhuman monsters that have your sympathy.

Trying to humanize orcs means asserting that a man-eating monster birthed from slime pits with barely more intelligence than a dog could properly belong to the category of "human being."

Orcs are evil.  They do not represent humans.  Their depictions as savage monsters stems from areas deep within the human mind and the common childhood fears we all share, expressed in myth, legend, and folklore.  It does not stem from white supremacist language or colonialists.  Orcs are equal-opportunity butchers, who murder and devour humans of every race equally alike.

Portraying humans as orcs, or orcs as humans, is wicked and racist.

But no one needs to apologize for portraying orcs as orcs.
Posted by Reece at 11:31 AM

If you really want to make a statement about racism using fantasy tropes, then consider literally humanizing orcs. Have orcs in your world really be normal human beings, who are portrayed as violent, brutish savages by propaganda from some powerful force within the kingdom. I probably wouldn't enjoy reading it, but at least you would be making a morally equivalent statement.