Harry Potter and the Sorcerers Who Don't Understand Magic

So I've blogged before about how Harry Potter; in particular I've blogged about how the Sorting Hat is either intentionally destroying the wizarding world or completely incompetent, but also a more general point on the nature of the series.

The first book is unmistakably a children's book; when it came out I was 10, and it was the hottest thing at that time.  I was actually in the same grade as Harry Potter when it came out, and all my friends were reading it.  Yet in just the same way the 7th book is unmistakably not a children's book.  For one thing, the later books are all well over 500 pages. They also touch on such topics as death, torture, and making out.

In children's books it is okay that adults are blundering idiots, that kids get away with nearly dooming the entire world to destruction, and that villains and heroes both time their moves exactly with one another.

Yet in adult books, all of that is inexcusable.

So when characters in the 5th book refer back to the events of the 1st book, they should be able to refer back to them and see how they acted completely oblivious to the existence of magic or of magicians who could perform magic, and how the three kids then lauded as heroes actually came inches from handing the key to immortal life to the most evil wizard in memory.

In Harry Potter and the Sorcerer's Stone, we meet Harry and follow him to Hogwarts where he learns magic, and watch as he tries to uncover the mystery of what is hidden in the forbidden wing and who is trying to take it.
Read more »
Posted by Reece at 7:40 PM 7 comments:

And ever as he rode, his hart did earne// To prove his puissance in battell brave 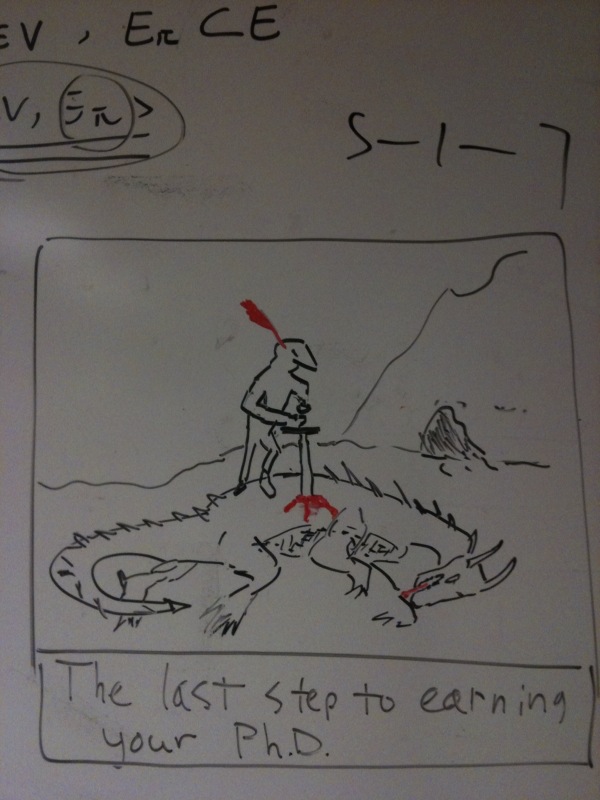 LII
Then freshly up arose the doughtie knight,
All healed of his hurts and woundes wide,
And did himselfe to battell ready dight;
Whose early foe awaiting him beside
To have devourd, so soone as day he spyde,
When now he saw himselfe so freshly reare,
As if late fight had nought him damnifyde,
He woxe dismayd, and gan his fate to feare;
Nathlesse with wonted rage he him advaunced neare.

LIII
And in his first encounter, gaping wide,
He thought attonce him to have swallowd quight,
And rusht upon him with outragious pride;
Who him r'encountring fierce, as hauke in flight
Perforce rebutted backe. The weapon bright
Taking advantage of his open jaw,
Ran through his mouth with so importune might,
That deepe emperst his darksome hollow maw,
And back retyrd, his life blood forth with all did draw.
- The Faerie Queene, Edmund Spenser, Book 1, Canto 11


One of the Chinese students was asking me about graduation requirements.  After listing a bunch of things, a friend also listed "slaying a dragon".  The Chinese student was very confused by this, and so I drew this picture on the office whiteboard to illustrate (notice the thermodynamics scribblings on the top).  Then I felt really good about my drawing skills and decided to post it online.  And then I figured a suitably epic quotation was need to go with it.

In my defense, by the way, let me just point out the correlation between the rise of the University system and the decline in reported dragon sightings.  Coincidence?  Hardly.


Apparently a number of states are talking about secession from the Union.  I live in one of the states with such a proposal.

Frankly, I can't see why anyone else would care?

The Dirac Sea: Turtles All the Way Down


This semester, I am taking a course on relativistic quantum mechanics.  Currently we are covering the "hole interpretation" of negative energy solutions to the Dirac equation.

I've done this stuff before, as an undergraduate, in private study, and in various grad-level courses.  So I'm used to the interpretation being given.  But I decided recently that it is perfectly absurd.

Why I'm Writing In Ron Paul

One day, maybe ten years from now, as I am standing in a breadline to pick up my weekly food rations for my "domestic cohabitation partnership", I want to at least be fed on the moral victory that I, apart from my fellow grumbling peasants in the breadline, that I at least did the most I could, and that I at least voted for the candidate who I actually thought could fix the country.  That I didn't cast my chips in with a candidate I found terrible even while calling him terrible.

At this point, that's the most I hope to get out of this election.

And that is why I intend to write in Ron Paul, and why I have decided not to vote for the other candidates.