In Defense of Jonah and the Whale

The story of Jonah and the whale is often trotted out as a prime example of one of the most absurd stories in the entire Bible.  Atheists in particular, when looking to point out the absurdity of believing events in the Bible to have really happened, are likely to pull out this story.

We all know the story of Jonah and the whale. 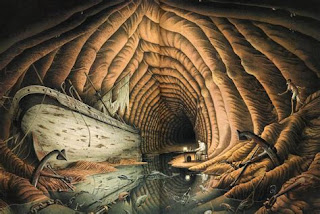 A prophet named Jonah is sailing the seas when his entire ship is swallowed whole by an enormous whale.  Jonah lives inside the whale's stomach, floating on the remains of his ship in a little pool of acidic water, for three days and three nights.  Finally, sensing he is near land, Jonah sets all the wreckage of swallowed boats on fire, creating so much smoke that the giant whale vomits out Jonah who sails away to safety on a small wooden raft.   And in this way, God saved Jonah from the whale.

We all know that story, because that's Disney's Pinocchio.

That is not the story of Jonah and the whale.

Put the Flour in the Bag: or, Just Adapt the Book, not your Fanfic

We're all familiar with the tags on mattresses, warning us it is a violation of federal law to remove the tag.  Those tags are a form of consumer protection.  The purpose of those tags is to state what materials were put inside the mattress, so that the factory can't stuff it with human hair then claim it's goose down.  Because wouldn't that be a crooked thing to do?  At one point, this was a major problem.  So they made a law.  You aren't allowed to sell a mattress claiming it's goose down when it's not made from goose down.  And so the tag is there as a means of prevention.

But you can kind of understand why someone would sell a mattress made of old human hair, and claim its goose down.  You can get the material for free, and sell it for a premium.

And you can understand a hundred other circumstances where a company would do this.

For instance a flour company, stuffing their bags with sawdust, but leaving the "flour" label on the bag.

Sawdust is cheap.  Flour is more expensive.  That's the point, that's why it happens.

But imagine a company that already had flour, and chose not to use it.  They choose instead to fill the bags with sawdust, and just leave the flour to go stale.

It's behavior that doesn't make any sense.

That is the situation we repeatedly find ourselves in with modern movie adaptations of classic stories.

A talented author creates a story which is beloved by audiences for some combination of its plot, characters, and worldbuilding.

A large media company sees the success of this story, and buys the rights to adapt the story for the screen.

The media company then hires a team of writers to write a completely different story.

Then they film that story instead, and put the name of the original story as the title.

This new, made-up story is the one film-goers see in theaters, and then they get mad that it's not the story that was on the label.

Let's examine the situation a bit more in depth, because there is really very little sense to it.

The original author is talented.  If you drag a rake through any given college English department, you'll find about a hundred or so would-be authors who just don't have what it takes to make a traditionally published novel.

Being traditionally published is itself leagues away from writing a beloved story remembered and passed on generations later.

The original author must therefore have an exceptionally rare talent, far beyond 5 sigmas.

The original story is also an exceptional story.  I can go onto the internet right now and download more freely-available prose than it would be possible for anyone to even read in a lifetime.  And most of it is not very good at all.  Even taking the stuff that's good enough to publish, most of it is good maybe for a slow afternoon with nothing else going on.

The original story, the one being adapted, must then be exceptionally well-crafted, with exceptionally good plots, characters, and/or detail behind the world of the story, as it stands out even among the works that stand out, gaining these enduring fanbases.

The writing team you hired... is not any of that.

The writing team you hired may be talented, but they are not so talented that their stories have international fanbases and have been read and published consistently for five decades.  If they did, then you'd be adapting their stories instead, and not the story you paid for the rights to.

The writing team you hired, statistically speaking, if asked to completely rewrite the story from scratch, is inevitably just going to create something worse than the original.

In terms of the possibility of making a story even just comparable with the original, the odds are not good.

In other words, going back to the opening metaphor, the writing team is likely going to give you sawdust.  Not flour.  And your customers want to buy flour.

If this were the extent of the situation --- media companies are doomed to have writing teams produce mostly mediocre stories --- then it wouldn't be surprising that they'd stick  the name of some other story onto theirs.  You have sawdust, you sell it as flour.

Except that they are not allowed to sell their sawdust labeled as flour, unless they pay money to buy the flour.

The right to adapt the story for film is not limited to the use of the title and names.  It includes the entire story.  The exceptional story written by the exceptional author.

The media company can make a film based on that story, instead. Because they paid to do so.  Often paying hundreds of millions of dollars to do so.  And that story is guaranteed to be of incredibly high quality and popularity.  The story the writers make up is not.

Given, prose and film are different media.  You still need a writing team to adapt the story to film.  This is what the writing team is good for, since they know how to express things better on screen.  But adapting the story, and completely rewriting the story, are not the same thing.

It really doesn't make any sense.  The only motivation I can think of for it is some kind of deliberate cruelty against the fandoms who made this title profitable in the first place.  And I really wish they'd stop doing it.

As an example, take the movie Willow.  It started because George Lucas wanted to adapt the Hobbit, and was denied the rights.  So he made his own movie about hobbits instead.  Film-goers still showed up.  Except these film-goers couldn't complain about all the inaccuracies in the lore.  They got what they paid for, and what they paid for was a generic fantasy about ersatz halflings.

But since media companies keep paying money for the rights to adapt stories, then I just have one plea.

Just put the flour in the bag.