Sailing Away to Narnia


I stumbled upon an article a few months ago that I've been meaning to blog for a while and never got around to.

The original article is by Chris van den Broeck, and deals with the subject of warp drives.

Yes, warp drives.  The Alcubierre warp drive engine is a device that stretches the spacetime around a spaceship, forming what is known in scientific literature as the "warp bubble" (really, that's what we call it).  Within the warp bubble, the ship is moving at "normal speeds", but outside of the bubble, the ship is moving faster than the speed of light.  The geometry for this is known and well understood, and the means of producing it are also fully understood.

You're probably wondering, if we know how to make a warp drive, why we haven't actually... you know... made a warp drive.  And that's a wonderful question.  We haven't made a warp drive because it requires a lot of stuff that probably doesn't exist, namely negative energy mass.  It requires a whole lot of it.  Like, ten times the positive mass of the entire universe in negative mass.

Van den Broeck proposed an idea to get around this, one elegant in both its simplicity and apparent absurdity.

We've gone from warp drives to the bag of holding, and we're not even done yet.  We're going all the way to Narnia.

You're probably familiar with the "rubber sheet" explanation of spacetime curvature.  The idea is that you can think of spacetime as like a rubber sheet, and mass on the sheet causes dents and bends in the rubber.  Some other mass moving on the sheet, when it comes near a larger mass, will feel the bend in the sheet and move toward the other mass.  This is kind of like how gravity works.  Mass in general relativity bends spacetime, objects respond to the curvature as if there were a force.
The rubber sheet also helps understand weirder curvature, but you kind of have to forget the previous analogy.  In the previous analogy, we assumed that we were holding the sheet horizontal to the ground and that there was already gravity below the sheet pulling the masses down vertically which... is kind of circular, and can cause false correlations with what I'm about to talk about, so ignore that part.

The problem with curved spacetime is that it's impossible to visualize all of it.  Our eyes can see 2D.  Our brains can turn that 2D vision in to 3D understanding.  Spacetime is 4D.  Then curvature in spacetime requires at least 5 dimensions.  We can get around this by taking 2D "slices" of the space and analyzing these.  We can show the curvature in these slices as a 3D drawing, thinking of the spacetime in the slice as being a rubber sheet pulled in some third direction.  This third direction is meaningless, physically, besides as a way to express how distances are distorted in the 2D slice.

With this way of thinking of spacetime, we can now visualize a lot more than just gravity wells.  We can also visualize black holes, worm holes, the Alcubierre warp drive, and the van den Broeck bubble.

First, consider time to be constant.  Typically, the spacetimes that relativists work with don't change in time, so keeping time constant isn't going to leave out very much (it will still leave out some if time is also distorted).  Now we have a 3-dimensional space at a single instant, sometimes called a "constant time slice".  To show the curvature in the space, pick a single plane in the space.  For instance, with the area outside a black hole, we normally pick the plane through the equator: this shows how the curvature changes with the radius and possibly even the longitude.  If we do this, we'll actually be right back at our rubber sheet model for gravity that we had before -- the only difference is that now it's slightly more rigorous.  Near a mass, like a planet of a black hole, space gets stretched in the radial direction, meaning that close to the mass you have to move "further" to go the same distance.  This is part of why it's so hard to get a rocket to orbit, but easy to move once it's there: less spacetime distortion.

This is a constant time equatorial slice of a black hole (that I found here).  It shows radial distortions falling in to the singularity.

You'll notice that right at the horizon, the slope of the "hole" is infinitely steep: you have to move infinite distance ("up") to go even the tiniest distance ("right") at the horizon.  Remember that up/down in the drawing has no physical meaning, besides to express how distances are distorted in the plane: there is no literal hole here.

Now lets take a constant time equatorial slice of the van den Broeck bubble.  It looks kind of like this.
The end of the green part is where I have further "sliced" the plane to make the bottom part visible, but the true image extends out of the page as well.  The gray part is the metal wall of the bubble.  In terms of the schematic in Broeck's paper, this corresponds to region II.  Do not think of it as a wall vertically -- that is, do not think of the inside of the bubble as a ditch in the ground.  It is only a wall moving along the plane.  And don't think that the blue person could "jump" in to the hole -- all he sees is a sphere with a certain radius.  Notice that the brown person is flat on the "floor" -- he isn't lying down on the floor, but rather that's the 2D plane slicing through him.  Drawing the person "standing" on the "floor" makes no sense; the *real* floor in the drawing is the interior rim of the bubble, which is right where the person's feet are located.  So he is standing on the floor.  A person outside the bubble is using calipers to measure the exterior radius, and the person inside the bubble is using a ruler to measure the interior radius.  The interior radius is much larger.

The direction corresponding to "down" here has no real physical meaning. There is no such direction.  It isn't height, length, width, and it isn't even time.  It's a purely fictitious direction.  However, being merely fictitious is no reason we can't consider it further.

What happens if we contort the space within the van den Broeck Bubble to such an extent as to cause the exterior radius to go to zero?  I've tried to illustrate this situation below: 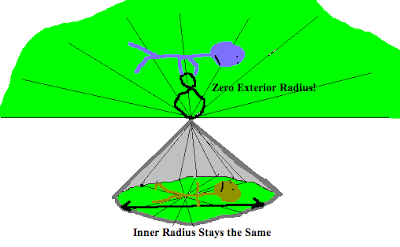 Again, don't think of the closure on the top as being a "roof": the actual roof is the part of the wall to the "right" of the person's head.  The way the walls connect is way more strange than that.

Now we have divided spacetime in to two distinct universes, one a tiny pocket of the other.  The Bubble is disconnected from the rest of the world.  The Bubble is its own, parallel world.  So what is to keep the Bubble tethered in the same place?
If the wall of the Bubble were disabled or somehow shut down such that the exterior radius became nonzero again, would the Bubble appear back in the room where it left?  Or what if the following situation occurs?

Now what are we supposed to do?  We re-flattened space, but we're not back.

Suppose, then, that there were to exist a parallel universe.  Maybe it's like Narnia, if that makes you more interested, and maybe Mr. Tumnus is there with tea and cakes.  Or maybe not.  Who knows. We don't know what parallel worlds are like.  Or if they even exist.  But suppose they do.  In our slice, we might represent this as another plane just "below" the first place: again "below" has no real physical meaning and is not a physical direction, so another plane there doesn't mean the parallel universe is underground or whatever -- it's separated from us by a direction currently unknown of.  It might even be a part of our own universe that has curled back on itself, like what is proposed to happen with wormholes. 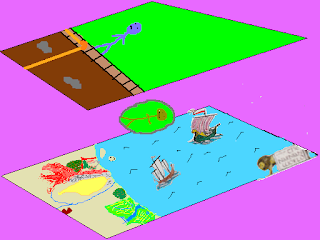 So here we are, drifting along in out our little personal universe.  Suppose then that our Bubble collides with the parallel universe.  Something like this might happen: 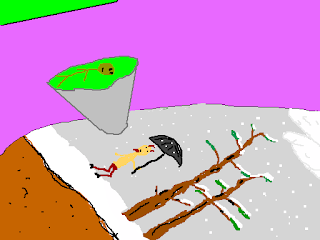 This shows the Bubble merging with the parallel universe.  It appears to Mr. Tumnus as a sphere that popped in to existence right at eye level, hopefully by slowly growing from a point.  We step out of the machine (assuming there's a door somewhere), and now we're in Narnia.

Of course, we can't make a van den Broeck Bubble, because it requires several dozen solar masses of negative energy.  It's a lot less than ten times the mass of the universe, but still pretty high.  Also, the model proposed by van den Broeck distorted space from 200 meters to the size of a Planck length, which is a factor of 10^17.  To make our Narnia-boat, we need to distort space by a factor of infinity.  It wouldn't be very easy to do.  Even if we could, we don't know that we'd separate from the original universe.  Even if we did separate, we don't know how we'd go about "drifting" in the void between worlds, because it isn't a real direction and Newton's Laws probably wouldn't work for moving in it (or else we'd all just move in that way right now and get out of this place).

But all caveats aside, it's still pretty cool.  We already have in our grasp a proposal for a machine that could really, potentially, transport us to whatever parallel worlds exist.  All that's stopping us is a series of technical impossibilities.
Posted by Reece at 9:56 PM

So that's why the Tardis is bigger on the inside. And I thought they just did it to be cool.