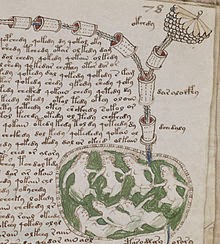 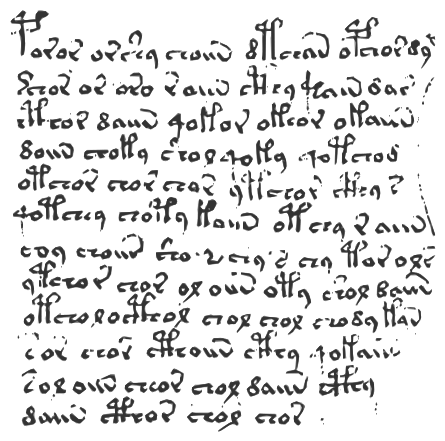 We need a team of linguists.  People unfamiliar with the Voynich manuscript, its history, proposed theories of it, yet proficient in the patterns of human language and writing.  We will introduce this team to the symbols, and how they occur in words, but absolutely not to actual passages in the actual book.  We ask them to  assign meaning to the symbols.  They assign them in a way based on human language, but not on supposed translations of the text, but otherwise arbitrary.  Whatever meaning they want, so long as it is consistent with what they know about other languages.  This task is similar to the construction of Dothraki, Klingon, or Quenya; we're not asking them to decipher, but to invent.  It is important that their decision of meaning is by no means influenced by hypotheses about the words as they occur in the manuscript.

Then, whatever language they come up with using those symbols, we declare those symbols to be the Voynich language.  We publish books listing all of the rules of the Voynich  language, and start popularizing the language, maybe through fictional universe tie-ins.

We have now reduced the problem of deciphering a bizarre and alien script with no clues as to content, to a matter of translating one version of a language to a later version of the same language.  This is much easier to work with.

If it turns out that our published Voynich language sheds absolutely no knowledge on what the original Voynich manuscript says, then I think we can fairly safely rule out the possibility of time travelers from the future.  If, using our invented language, we are able to clearly read the Voynich manuscript, then that is pretty strong evidence for the existence of future time travel.

Is the Voynich manuscript written by a time traveler from the future?  I really, seriously doubt it.  But if it is, then now we know a way to test it, and more interestingly, a way to read it.
Posted by Reece at 7:43 PM

You can stop with your assumptions, because there is already a solution. It almost seems to be a law of nature that if you can not explain something, aliens and time travelers are trying. The Voynich is a simple ingenious work of brilliant thinkers. It is better to spend time with his thinking, to develop a solution that is called: it is written in LATIN!
More can be found on my homepage www.voynich-manuskript.de or via the direct link www.voynich.solutions to the English pages.

I most defiantly been feeling and noticing Hugh changes to many people I know as if we were in a different movie all together , it never made any sense to me, now I do believe theres been an alternet shift in our world here.

Jutta, after reviewing your website, I have to call bulls**t on you. You claim to have already translated the manuscript, yet you are asking for "250 thousand USD" to complete and publish your work. Although there are limited Latin references in the manuscript, it does not help in the deciphering. Plus if it were written in Latin, it would have already been deciphered by now. After all, numerous scholars from prestigious universities have been working on it for decades (however you were able to do so with no problem). Your website does not list who you are or what your credentials are. Just a link to "Donate". This blog is not claiming that aliens and time travelers are responsible - it is just a theory meant to exercise imagination and promote healthy inquisitive dialogue among people with the same interests.

Reece, this is a wonderful idea - basically reverse engineering the written language! My only question is how long do you think we would we have to wait for our version of the Voynich language to evolve in order to extrapolate the translation for the original manuscript?

Thanks Sylvia! Yeah, I checked out his site, and didn't really get it. I would think Latin would be the absolutely most obvious language to check for an illuminated manuscript written during the middle ages. They've already tried Latin. Part of the problem with Latin is that the Voynich manuscript has a lot of repetitions of words in it, which is not a common feature of Latin. I couldn't figure out how the interpretation scheme was supposed to work, but it seemed like it involved a lot of randomization and guessing.

Interesting theory - I like that your version of time travel is consistent with the time-traveler-meddling-in-the-past-inadvertently-causes-his-own-future school of thought. I've never bought the theories about changing the past and consequently altering the future. Easiest way to ruin good scifi is to use time travel that's not internally consistent.

I think among the most jarring examples of this was Lost in Space. The ending of that movie made no sense to me, at all. (Also, sending one older family with one teenage daughter and one pre-teen son, an older male doctor, and a young adult pilot, on a space journey lasting decades and never returning was a really bad decision...) Devil with a Glass Hand was also really about about this, but I let it slide for Rule of Cool.

There are so many others - Back to the Future, Terminator 2, Looper - all movies I loved the first time I saw them but, on repeated watchings, became disappointed with the giant holes in the plot and illogical endings that only seem plausible when you don't think them through. But sometimes you have to lower your standards and let the cool factor be enough.

Still haven't seen Lost in Space or Devil with a Glass Hand, but I'll add them both to my list of movies to watch.

Devil with a Glass Hand is really neat. It's an old Outer Limits special from the 50's. I think you can find it on YouTube, actually. The time travel in it makes no sense at all, but the plot line is really well paced.

Have you seen Primer? They did things really well. The production quality is really bad, though (it was made for like $1000 in a basement), so it's hard to hear them sometimes and you miss critical plot points.

2. Ignoring the paradox, what if the manuscript was written more recently (i.e. before your creation of this Voynich language) and was then taken back in time? It would not follow the rules of your Voynich language, even though it is still written with the same symbols.

Has Anglo Saxon been taken into consideration? There were supposed forms of anglosaxon that were meant to be used for purposes of sending messages without having to worry about them being taken and deciphered.

Try Predestination for a time travel movie. I'm sure it's scientifically ridiculous but it's consistent within its own rules. It's also a hell of a mindtrip.

Reece, You talk about Voynich Manuscripts reading. I have read this information how to read. I found a great way to reading. I told that it is very useful link tricks for me. I am waiting for next post.