Trying to decode The Beginning Place by Ursula Le Guin

I recently reread this favorite of mine.  My copy is an old, worn paperback I purchased at a used bookstore in the middle of nowhere in Georgia.  The cover art shows the two man characters Hugh and Irena lost wandering in a forest, Hugh dressed in the vest from Tembreabrezi with the ceremonial sword drawn, and Irena in the red traveling cloak the inn lent her.  I've seen other covers for the book, and this one blows the others away.  It is apparently also the author's favorite, because it's the one she shows on her website. 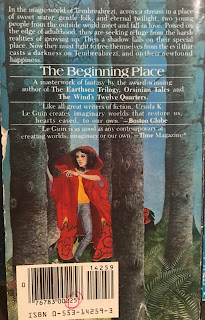 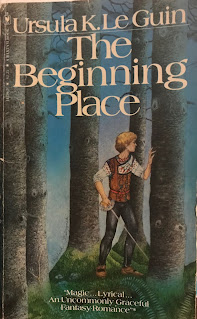 This book, especially with this cover, might make you think this story is in the same genre as Narnia or Bridge to Terabithia.  It is and it isn't.  For one, this book is not meant for children.  It's actually too mature for young adult.  It'd be better for students just entering college.

If you recently read this book and are trying to understand it, or read it long ago but didn't really get it or don't remember much, I'm going to offer an explanation for the story that should help it make more sense.  (Spoilers below)

To enjoy this book, you need to understand that it is not the same kind of book as Narnia.

Narnia is a modern book.  It has fairy tale elements, but it is still very explicit.  You understand Narnia with your conscious mind.

The world of Tembreabrezi is properly mythic.  It is not explicit.  You do not ever understand it consciously.

The main characters are modern characters.  They have actions and motives that are well-understood by the reader.  They have internal dialogue that we can read and understand.  The characters of the other world are not modern.  They are properly mythic.  They follow rules that cannot be understood, with motivations that are never explained.

For many of the reviewers on Goodreads, this is a huge frustration.  Instead of appearing mythic, the world just appears hastily constructed and underdeveloped.  They wanted to understand what was going on, or slowly learn over the course of the book the mystery of Tembreabrezi.  They were expecting Brandon Sanderson to slowly introduce the rules of allomancy as the main characters developed their powers.  They were not expecting it to be the sort of world whose mystery was unknowable.

You read it and feel like there is something else going on, like there is more to the story, but no explanation of what it is.  And that's accurate.  There is much more going on.  But unlike modern stories, you are supposed to intuit the part that isn't said.

The author only hints at the true nature of Tembreabrezi in a few easy-to-miss lines.  In a careful re-read, knowing to look for them, they stick out better.

I do not mean that they are elements meant to symbolize other things.  I don't mean that when she says "the City" you're supposed to mentally substitute in some other referent.  I mean that what these elements are, are mythological symbols by themselves.

The book draws largely from Jungian typology, and a working knowledge of Jung's archetypes will shed more light on the things happening.  The water of the creek is not water but the collective unconscious, the deeper spiritual part of the mind with which we connect and make peace with the universe.  The characters begin by drinking from it, being led to rituals of prayer.

Allia is not a girl.  The monster is not a monster.  They are both embodiments of Hugh's anima.  The anima is the idealization of the female within the male mind.  It can have negative and dark aspects as with the monster, or positive as with Allia.  Hugh's decision to slay the monster to become worthy of Allia is not really about that; it's about Hugh's rejection of the toxic, possessive femininity of his mother to become ready for an intimate relationship.  Notice, he does this all for Allia, but he never goes back to Allia.  It wasn't really for her that he had to slay the monster.

Master Sark is not a man.  Lord Horn is not a man.  They are both embodiments of Irena's animus.  The animus is the idealization of the male within the female mind.  Sark is a dark and cruel man, with whom Irena is first obsessively in love.  He represents the toxic masculinity of her stepfather.  Her sudden change in attitude toward Lord Horn is not about her realizing Horn is nice and Sark is mean; it is about her decision to move beyond her stepfather and the negative example of her mother's dependence, and begin trusting men again. Notice what she calls Sark as she begins to understand him: her mirror image.

The central drama of the story is not really about two kids fighting a monster.  It's really about Man choosing to serve and protect Woman, rather than exploit her.  Here the story draws on mythic imagery from the story of Psyche and Cupid -- the stone table where a girl is to be tied and exposed in sacrifice to the monster in the mountain.

There are many stories, of course, where a character represents the anima or represents the ideal man/woman.  Where a body of water represents the collective unconscious.  I don't think this story works at that level.  In this story, Allia is literally Hugh's anima.  The stream they drink from is literally the collective unconscious.  The space Hugh and Irena found is the world of their inner psychology, and they are really interacting with their own internal psychological projections.

It is this mythologizing of the internal psyches of the characters, turning them into secondary fairy tale worlds, that I think makes Tembreabrezi so fascinating.  It isn't a place.  It's a mental space.  The idyllic mountain village, the stone-lined streets, the warm fire of the inn snuggled under the shade of the mountain is a state of mind.  It's not really through a portal.  It's really in your mind, as a changeless sanctuary of thought.  Because it's really a state of mind, it really stays with you after reading, and really was already there.  While the exact form Le Guin gives to it might not be the same, the mountain town itself is a part of the psyche.

Had Le Guin ever stated this, I think it would have ruined the story.  She would have lost the myth, and by being explicit become hokey.  (Like scenes of the head key from Locke House.)

Now that you have some idea of what is actually going on, try rereading it.  Hopefully it will make more sense and the world become more memorable.